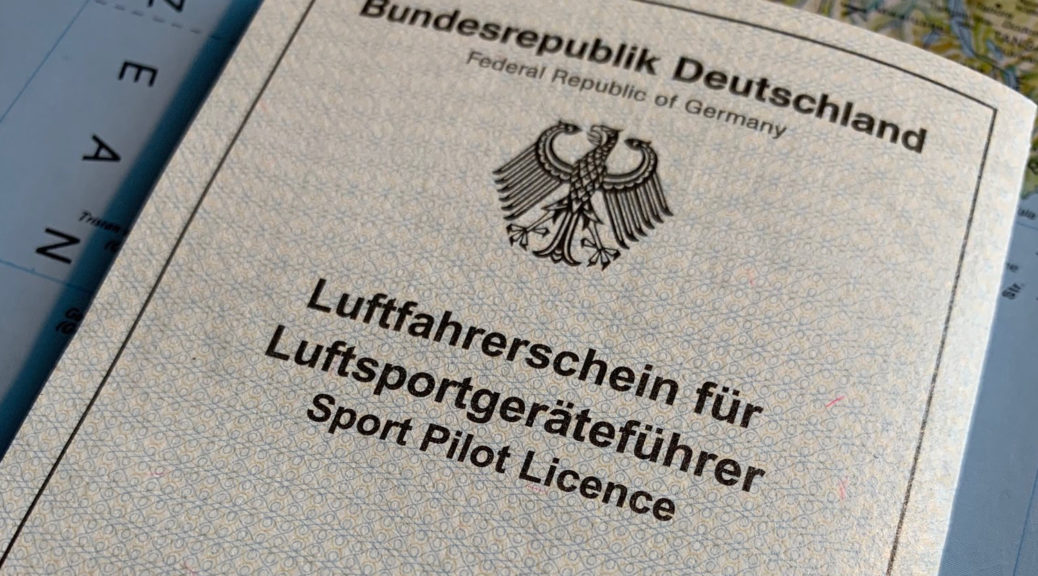 So, I got an upgraded license in the mail.

It makes it legal for me to fly „power driven flying sport products“ (I love legal language!) with a maximum empty weight of 120 kilograms (about 260 pounds). Those are single seat ultralights.

Question is: how do I train for exercising this privilege…? 🤔

I was at the airport yesterday and talked to two of the other flight schools about a “Private Pilote Licence” (PPL).

I have a “Sports Pilots Licence” (SPL) right now. It lets me fly “ultra light” aircraft with a maximum take-off weight of 475,5 kg. I can fly VFR (visual flight rule) in the day time in Germany and a number of neighboring countries, that Germany has mutual agreements with.

From my SPL I can trasition to a PPL-N, the national version of the private pilot licence. That will let me fly single engine piston aircraft with two seats and a maximum take-off weight of 750 kg. I can fly VFR in the day time in Germany only.

Ultra lights have come a very long way from the “lawn chairs with wings” that they used to be. Modern ultra lights like my trusted “Rider” or the “Wild Thing” are quite capable and very economic. They are fun to fly and range from very simple fun flyers to high tech flying machines. Modern ultra lights can exheed 150 knots cruise speed with retractable gears and adjustable pitch propellers.

In the PPL world, the development is much slower. The reason for that is the very different certification process. It makes the equipment much more expensive which means it is also more expensive to get the PPL and later charter aircraft.

The PPL-N has no big advantage over the SPL in itself. But it does open the door to a whole new range of options which are not available in the ultra light class.

The most obvious change is weight restriction: While I start in a similar weight class, I can get a two ton rating which will allow me to fly larger aircraft. Single engine aircraft with up to two tons covers most of the market. So I will be able to charter airplanes with four or six seats.

I can get extra ratings which will expand possibilities and safety like a rating for night flight, for controlled visual flight and even a rating for instrument flight (IFR).

And some day, in the distant future, I can get the international version of the PPL which will let me charter aircraft all over the world.

So after I have the tail wheel endorsement (which should be soon), I will go back to “ground school” for the PPL theory. Stay tuned for more licence talk!

It’s official, stamp and all – I can carry passengers now. My last flight to Eisenhüttenstadt was good enough for the lady at the aviation administration and she mailed an updated licese to me.

So if you don’t want to come fly with me, now would be a good time to come up with excuses!

Today my licence arrived in the mail. The stamp makes it official, what a great feeling!

Last week I went to the flight school to complete the paper work with the instructor. He was not there the day I took the test, so we had a cup of coffee together last week and got the application for the licence ready.

And since I was there anyway, I took my new powers for a spin. Without the physical licence, the instructor had to write a flight plan for me and sign that he was sending me.

I went on the short hop over to Eggersdorf. I had done that trip numerous times before and it was a good first trip as a new pilot.