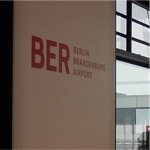 More than two sears ago, I volunteered to test the passenger experience at the new airport. A lot about the airport has gone wrong since then. The opening has been postponed with only a few weeks notice (what a disaster!!).

At the center of the problems is the fire security system of the main terminal building. It was designed to be a market beating high tech wonder. But the very elaborate control system never quite worked right. And little by little more problems with the basic design of the entire system surfaced.

All efforts to resolve the technical problems have been rather helpless and chaotic ever since. The sparkling new gateway into the city has become a nightmare and a laughingstock.

Today I am back. After much public discussion and derisive media coverage, the PR department of the unfinished project has finally woken up. A media campaign invites people to see for themselves and this is what I’m here for today.

The cites airports are both dated and long over the capacity they were designed for. The southern airport has a smallish and dusty main terminal with a cacophony of annexes. South of the terminal is the single runway.
This single runway is going to be the northern one of the two runways of the new airport. In between them are parking structures, highway connection, a large train station, offices and hotels as well as the troubled new terminal complex.

So in some way the new airport is an expansion of the already existing airport. But the project is vast and the new airport has nothing of the backwardness of its predecessor. If only they would get it done…

The tour group meets at the old terminal. We are almost 30 people and our tour guide is very knowledgable. He has been working at the airport for 20 years. We board a bus and a short trip over the highway brings us around and into the new part. We drive past a large area for a new business district. All the roads are ready but on the lots the grass grows high.

The bus takes the empty roads up to the main terminal building. The atmosphere is like in a SciFi movie.

When I first saw the terminal building more than two years ago, I was impressed and intimidated at the same time. It felt large, impressive and contemporary. The architecture is strong, the design is refined but not delicate. There is no understatement, no scandinavian lightness. This building carries a message of self esteem, it looks impressive and expensive  – a bit like a golden Rolex would.

Little has changed since my last visit. Most of the plastic covers have disappeared and some of the screens are working. The most significant change is the „flying carpet“. A metal sculpture suspended from the ceiling above the center of the main hall. It is red, delicately woven and noticeably changes the room. It breaks the seriousness and does bring lightness after all.

I had mixed feelings about the building. Now the positive associations outweigh my skepticism. The building is beautiful and does have elegance.

The stream of bad news, new scandals and uncovered problems on the construction site has turned the public opinion against this prestigious and important project. Our tour guide talks openly about mistakes and short comings during the planning phase. He also points out that the problems with the complex fire alarm system are not solved yet and that he personally estimates two more years before the opening. He patiently answers our many questions.

After visiting the terminal, the bus takes us out onto the Tarmac. The vast, empty airport structure is both impressive and very sad.

For the end of the tour, we go down the new runway. As the bus speeds down the 4 kilometers, my seat neighbor starts calling „pull-up, pull-up!“. Everyone smiles.

My idea of fun is going to the airport. I am going to test our new international airport today. It is due to open this summer. Before that, there are dozens of test runs with hundreds or thousands of volunteers. Today is my turn!

The shuttle bus picks us up at the train station and takes us to the construction site. All of the buildings are there already and I get a pretty good idea of the whole set up. It is a modern, very large airport complex. Nothing like the two old and improvised airports it is going to replace. This one is build for easy access and large crowds, but it is also build as the international gate to the capital city. And it is build with a lot of self esteem.

The test run starts in a drafty tent with long rows of pick nick tables. We are a group of about 200 testers today. We register, get our safety gear and wait for the briefing to start.

The day is organized by the “Operational Readiness and Airport Transfer”-Team. “ORAT” is hired from the Munich airport. They did a remarkable job when the new airport in Munich opened, a few years back. The dividend of the good planning back then are consulting jobs now.

We get “tickets” for two trips. One in the morning, the other one after lunch. Each tester plays two passengers on each of the flights. On the first round I am two friends who are flying to Budapest on Lufthansa.

We are walked over to the terminal building, go through a wooden temporary door and walk up a flight of stairs that still need their finish. The grandness of the entrance hall appears in front of us as we ascend the stairs.

“Will they be ready?”

The main floor of the terminal is about twice as big as a football field and maybe six stories high. There are four majestically high but also surprisingly delicate steel pillars in the middle of the room. Three sides are glass from floor to ceiling. On the fourth side is a high wall with a balcony about half way up. The check-in counters are grouped together in little pavilions on the main floor. Ther walls are dark wood that harmonizes nicely with the cream colored marble floor and brushed steel used for railings and handles.

The first impression a feeling of grandness. This has nothing in common with the two active airports of the city. Maybe its closest relative is the now decommissioned terminal of the former inner city airport which was build in a time in Germany, when nothing could be big enough. The building is impressive, no doubt. It is build by a country that is strong and knows it. It is flooded with light, open, transparent and the smaller structures of the check-in gazeboseffectively counter act the feeling of individual smallness. The architect was trying to impress but not to intimidate. I have mixed feelings about the terminal and they will stay with me for the rest of the day.

One of the other testers looks around and is surprised. “This is never going to be ready in time!” he exclaims. Trust me, I know. They will be ready.

What happens to lost luggage

Before we find our respective check-in counters, we pick up test luggage. The bags are close to the entrance. Piled up higher than a man are rows and rows of bags, suit cases and trolleys. Some of them damaged, many marked with spray paint, all of them seasoned travelers. Maybe ten thousand maybe more. A friendly worker picks out two per person. They are heavy, I get a cart.

The Lufthansa check-in desk is easy to find. Only two of the pavilions are active for the test today. I am greeted by a friendly Lufthansa employee who has one supervisor and one member of the ORAT-Team as observers standing behind her. I request a window seat on the right side of the aircraft so that I would have a view of Budapest on final approach. The Lufthansa lady only hesitates for a fraction of a second before she smiles at me and says “no problem, sir!”.

Security is uneventful. The area behind the check-point is going to be a shopping area. It is probably going to be nice but right now it is a construction site in full swing. Workers are everywhere and it is loud and dusty.

At the gate we gather. We have time to talk to each other before the flight “boards”. I make friends with a student of aeronautical engineering and a travel agent.

After our “flight” we have lunch in the tent together. We are all of the same opinion: The new airport is impressive and we will all be back. For a next round of tests and for an actual trip.

I will be testing our new Airport!

In July of 2012, the new airport “Berlin Brandenburg International” (BER) will open. Before that, there will be a series of tests for the new terminals.

Yours truly signed up as a volunteer for the test programm and I was accepted. So next February (!) I will spend a day at the new airport pretending to travel.