One of the few advantages of winter in northern Europe is visiting a sauna. My flying buddy and I have been sitting in the mist on the airfield for a while before we decided that it would be better to sweat in the sauna than to sweat in minimal weather.

When taking to the skies, a very informed and very critical look at the weather is crucial. We are planning a long trip, so the weather observation is complex. We have postponed our trip from Thursday to Tuesday because a weather system was moving through southern Europe. Today, our route looks good but we ave problems getting started.

The aircraft is stationed at EDGF, a grass field at an altitude of 1558 ft. The cloud base is almost touching the field, a few of the hills we have to cross are actually in the clouds. No point in getting worked-up about something we can’t change, though. This is VFR flying in the winter.

After two days of waiting for the weather to improve, we decide to postpone out trip once more. My flying buddy goes home and I visit family close by.

A few weeks ago, my dear LISA was moved from Schönhagen to Egelsbach. I am staying just a few miles away from the airport and so I decide to go see her. The local weather is not great either, but a number of small planes are in the pattern. So I take LISA for a spin – for old times sake.

I fire-up the ipad and make a flight plan for EDRY, about half and hour to the south. I have been meaning to visit the Technic Museum Speyer for a long time. I’m on my own, I have no schedule and no pressure. Great conditions for a training flight in less than optimal weather. If it should get dicey, I can just turn back. No danger of get-there-itis which can cause oh so many problems…

The flight is demanding. The visibility is not bad but the cloud base is low and with rising terrain, there is not all that much room to maneuver. All within legal limits but when I get in between two hills, I keep looking over my shoulder to make sure the escape route is clear.

Finally the terrain is getting lower. I navigate around the controlled airspace of EDFM and very soon I see the city of Speyer on the river.

In the pattern at EDRY, I have the last demanding moment of the trip. There are individual clouds in the pattern. Like big, puffy sheep they are blocking my path and I have to navigate around them.

The airport staff at Speyer is extremely friendly and on a day like today they have time for a chat. I even get a discount coupon for the museum. Nice gesture but I would have gone anyway…

In the afternoon the winter sun has had enough time to raise the cloud base and has even burned a few holes into it. The trip home is delightful and much easier.

I am very glad that I did get to fly after all. And the trip was great training. Over the next couple of days I will monitor the weather development closely to see if another window opens up for the big trip!

My traveling ship of choice, the trusted „LISA“ had an engine failure! During regular maintenance, the shop found a lot of metal flakes in the oil filter (always an alarm signal). Further investigation revealed a broken cylinder #3. The engine is now being inspected for more damage.

The engine was brand new and a failure like this is pretty unusual. So I am interested to see if the cause can be determined. And I am very happy that the problem was found in the shop and not in the air.

My dear „Pilot&Flugzeug“ is going through rough times right now, as „LISAs“ sister ship in Egelsbach had a landing accident in the same week. The propeller is bent and the engine needs to be inspected as well.

With out the „LISAs“, the flying fall promises to be pretty bleak.

I have not spent as much time with „Lisa“ as I would have liked. She is one of the airplanes of the „Pilot & Flugzeug“ magazine and she is available for readers to rent.

Last summer I got checked out on her and later that year I took her on a little trip to Dessau. But over the winter we did not have a chance to fly together.

Today I have a great excuse. I am taking a friend on a trip over the Big City. We have wanted to do this for a long time and today is the day.

I arrive at the airport early. I want to have time to practice on my own before I take passengers. After my „baby break“ that seems like a good idea. I have refreshed my memory about „Lisa’s“ vital stats (speeds and limitations) and I flew as co pilot on her only a few days ago. I am looking forward to some one-on-one time with her.

„Lisa“ is waiting for me outside the hangar. I do a slow and thorough pre-flight check before I fire the engine up. It has been replaced very recently and starts up at once. Taxiing is a bit of a challenge. „Lisa’s“ front wheel is free swinging and ground steering is accomplished by differential breaking of the main wheels. This strange method makes for some swinging around the center line before I get used to it again.

On the runway I push the throttle all the way forward. „Lisa“ is not a sprinter but the runway is long. Once airborne, It does not take long to feel comfortable again. The Cheetah is a lot of fun and landing her is a dream. Because of the low wing configuration, there is a noticeable ground effect. When the wing gets close to the ground, the air flowing under it can not escape any more. An area of high pressure forms between the wing and the ground. The aircraft „floats“ on this cushion and lands very softly. 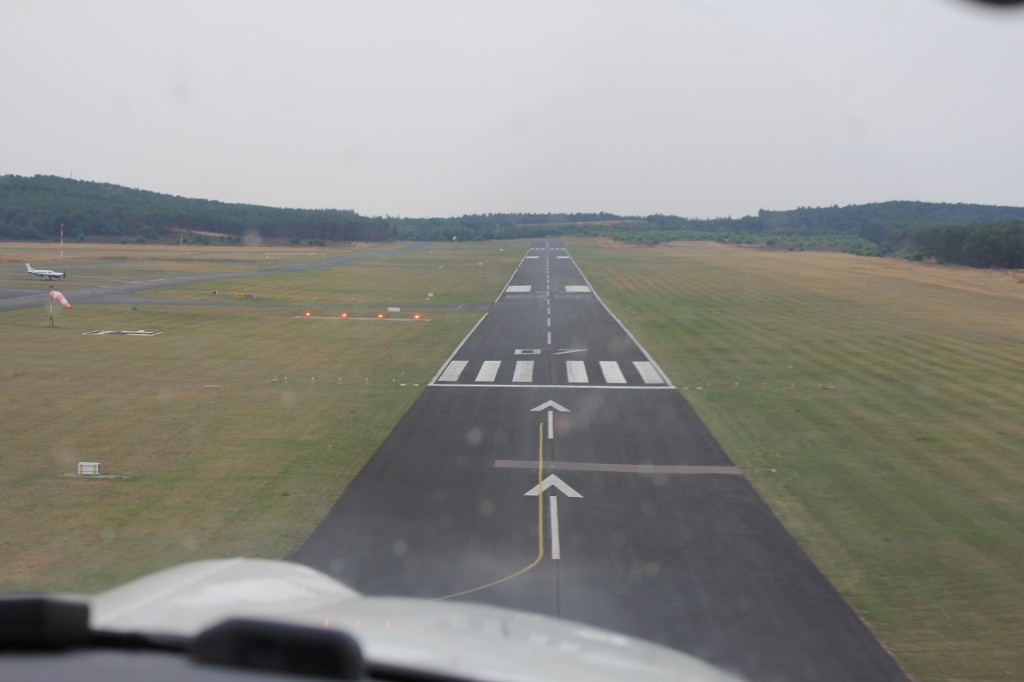 I do a bit of pattern work to loosen up. Then I’m off to the Big City. I want to do a „dress rehearsal“ of the whole trip. I dial in the tower frequency for the international airport. The controllers are also responsible for the sectors of controlled airspace I want to cross. I call and state who I am, where I am and what my intentions are. As always, I am a bit nervous initially. Luckily that dissipates quickly in the routine of the exchange. The controller is friendly and the trip over the city is a real treat.

Waiting for the passengers

Back at EDAZ I wait for my passengers. I have about half an hour and after initial impatience, I pace myself and enjoy the moment of down time before the concentration of a passenger flight.

My friends are full of anticipation and I explain the route for this evening. We go and everything works like a dream. We are cleared to cross midfield over the international airport and fly towards the city center. The view is great and the cameras are clicking. 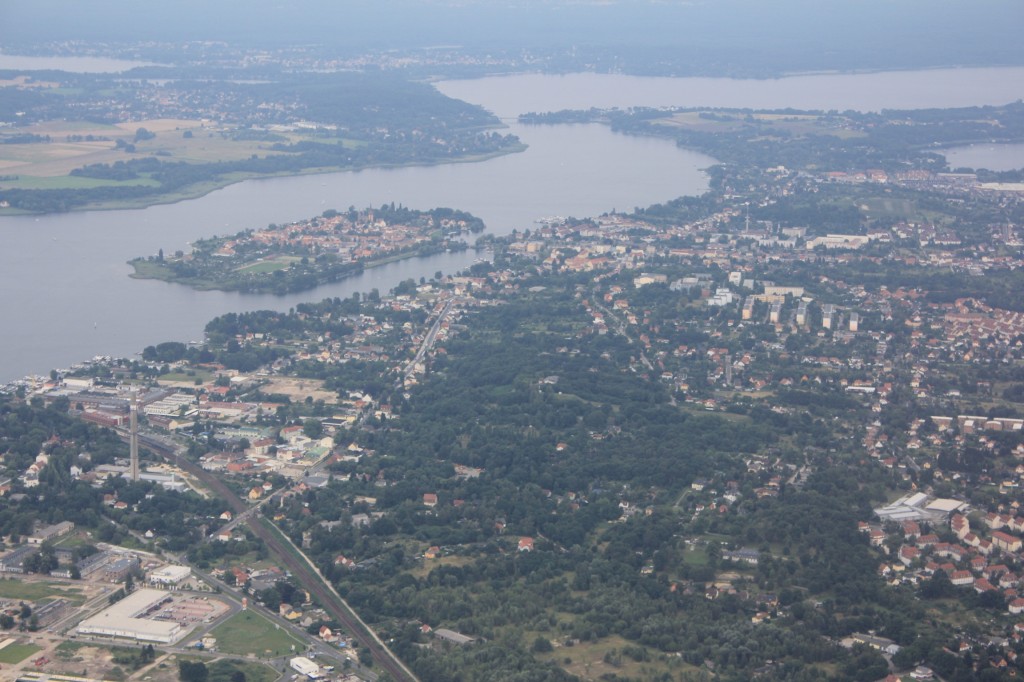 We have some more time and so we decide to take the long way home. A few miles south of the Big City is the largest freestanding building in the world. The former Cargolifter airship hangar is very impressive from the ground and even more impressive when circling it at 1.000 feet. 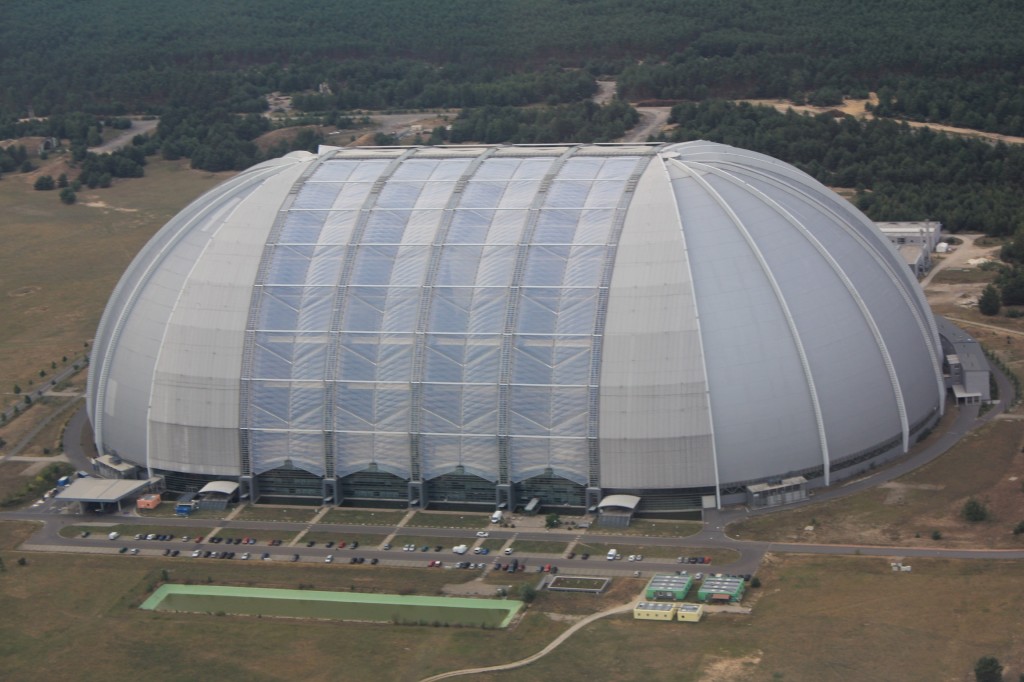 Back at EDAZ it is time for a beer. The local watering hole has a terrace overlooking the apron. We watch the last flights of the evening come in and life is good.

I read several magazines about aviation on a more or less regular basis. But there is one that I never miss an issue of: “Pilot und Flugzeug“. The magazine itself is in a small format and does not look as glossy as some. But the content is the best I have seen. A lot of it is over my head but I am inspired by it every month.

The other great thing about “Pilot und Flugzeug” is the fact that they operate three aircraft. Two are single engine four seaters and one is a pressurized turbine twin. And all of them are available for readers to use!

Today I will be checked out on “Lisa Berlin”. She is a Grumman AA-5A “Cheetah”. LISA is a light four seater, not unlike the Cessna 172 I have been flying. But her low wing configuration gives her a sleek look compared to the trusted but bulky Cessna. I have read the flight manual, passed a small online check-out, mailed copies of my license and the rental agreement to the publisher and today I get to meet LISA in person.

LISA is stationed at Schönhagen. A busy and well organized airfield south of the big city. I am early and a friendly clerk hands me log book and the keys. I have time for a walk around on my own.

When the friendly instructor arrives, we start with some formalities and ground school. Then follows the briefing in the aircraft. LISA was born in the 70s but has been equipped with modern avionics, including a Bendix KFD 840 “Primary Flight Display”. This integrated flight instrument requires some training before it is mastered.

I’m ready for some action and so is LISA. The steering on the ground is done by differential breaking which requires practice. We take off and fly out of the pattern to do air work. As a low wing aircraft, LISA has a higher roll rate than the high wing Cessna, the climb qualities are similar.

We do a few turns, stalls, slow flight with flaps and without, and a basic introduction to the auto pilot. I like the little cat right away. She feels lighter on the controls than the Cessna and is still more stable than the agile but nervous Light Sport class.

After about half an hour of air work, we turn back to the airport for some landings. On to the next challenge!

The instructor has told me to not worry too much and just cut the power a bit earlyer that I usually would. So I bring the engine to idle, flare and grease her to the ground. The stall horn chimes (as it should) and LISA sits down in the middle of the touch down zone. Wow, that was easy!

Beginners luck – the next two approaches are a bit bumpier. But all in all LISA handles well on approach and lands easily.

After an hour the instructor has seen enough. He signs my log book and I am officially qualified to fly PIC in the Grumman AA-5A. EDAZ has a nice restaurant with a terrace overlooking the apron. This is where I conclude the flying day with a large beverage on the table in front of me. I can’t wait for the next time I see LISA!